The wind seemed to cut right through my sweatshirt as if it were a tablecloth. I stood just inches from the lapping water as the clouds hung large and low over the restless lake. My ice-cold fingers smoothed a renegade curl of hair away from my eyes, and I couldn’t help but smile as the water from a particularly strong wave sprayed my cheek. This was August 4th, 2008, and it couldn’t have been more than 45 degrees Fahrenheit. There was something so right about this moment. As I turned to walk away from the lake and head back up the hill, I thought back to this piano piece by Ravel that I had just started listening to called Menuet antique.(I tried to find a recording on Youtube that I liked, but the recording I'd recommend is Pascal Roge's on iTunes.) In the second section, there is a part that just feels right. It is weighty- full of memories from the past and full of hope for the future- but content in the moment. No urge to move anywhere- just to sit and reflect. Very few moments in life are even remotely close to this, and I think this is why I fell in love with this piece. And why the summer of 2008?

The year before was my junior year of high school. The year began as routinely as any, from what I remember. The day after Thanksgiving, I was on Facebook and my newsfeed was exploding.
RIP Jackie.
Jackie, we’ll miss you.
Gone too soon, Jackie.
Jackie? I racked my brain. These statuses were coming from friends in upstate New York, where I spent most of elementary school and one year of middle school. After a little further digging, I realized that this was Jackie M, Jackie from my fifth grade class. The sweet blonde curly haired girl who played sports with the boys and always stuck up for me. She was the kind of person who always stuck up for the new kid, the underdog, the challenged. I had lost touch with her, but I never forgot how kind she was to me and how much fun it had been in the same class with her. She had been in a fatal car crash. Driving on a curvy road and hit a tree. I knew exactly where too. With her death, I realized that the mem of New York, that place so dear to me, were changed forever. Before the tragedy, I thought of New York as "just a few years ago," as somewhere I had just moved from. When the accident happened, I thought of my former classmates- I wondered how they were doing, what they thought. Had they grown closer to her since I'd left, or had everyone drifted apart? I realized that there was no way to tell. I felt a bit like an outsider looking in. I didn’t know who she or almost anyone else in that small town had become since I moved away in sixth grade; all I knew was my childhood there, and that childhood, I realized, was now far behind me. While I talked to some of my fifth grade classmates on Facebook chat, I became aware of my inability to fully comprehend the tragedy the way they saw it. Maybe I didn’t have to. Her death- that wasn’t right. It was too soon.
Then, a day before New Years, a family from our area of town in Baltimore, was involved in a head-on collision with a drunk driver going the wrong way on a highway. Five kids and the stepmom were killed- only one girl and her dad survived. For an eight year old to go through such a traumatic ordeal- this wasn’t right.
These tragedies impacted me greatly, even though I didn’t know the family from our area. I became poignantly aware of the immense pain and suffering ‘ordinary’ people endure because of terrible things that happen in this world, things that aren’t right.
By spring I was too busy to be sad for very long. Actually, many of the memories I have from that year are good ones. My trio (some of my closest friends to this day) got to the semifinals of a national chamber music competition, and we spent a lot of time together, rehearsing, performing, traveling, and just hanging out.
For part of that summer, the summer of 2008, I was in Canada for Domaine Forget, a month-long music festival. The place was beautiful. 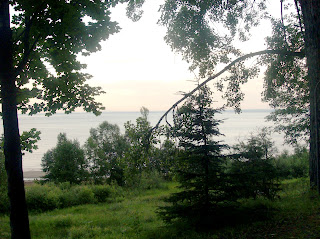 I had actually started listening to the Menuet back in April and enjoyed listening to it because it was by Ravel. Maurice Ravel wrote Le tombeau de Couperin, a piece I had discovered the summer before at Tanglewood. But there at Domaine Forget amidst the breathtaking sunsets and clear blue skies, the Menuet took on a different meaning to me, and I was brought back to the tragedies that had happened in the winter. Instead of feeling sad, I realized that there was beauty that rose out of the suffering. I was listening to the Menuet antique while looking at the view one morning, thinking that nothing could be prettier than this. Then I heard the second section of the Menuet, something clicked. I could appreciate this moment more because of the tragedy. A lot had happened to get me to this point. I truly saw beauty with new eyes, and I was filled with hope. 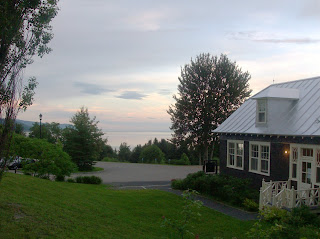 My eyes and heart were opened to the many other moments at Domaine that were “just right.”

The moment upon waking up with the sunbeams coming slanted and strong in the window before 6 in the morning with the mysterious ambiance of deep sleep still lingering and a whole day stretching in front of me. Hearing the soft snores of my cabin mates and quietly crawling to the ladder and slipping down, feet hitting the cold wooden floor.

Walking along the beach with my cabinmates after a long day of practicing and master classes, writing in the sand with our bare feet as the sunset colored our world orange and pink. 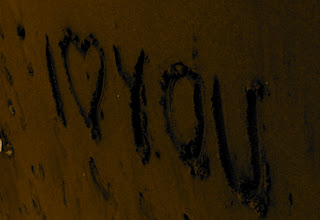 The concert of the a cappella group called Cantabile- one of the most riveting performances I have ever seen- and being part of the audience who was quite content to listen to three encores – and still begged for more.

The time I was practicing in a cabin and I found this guy staring at me. I just stopped and stared back, then finally grabbed my camera. He stood stock still, then when I began playing Martinu he hightailed it out of there. 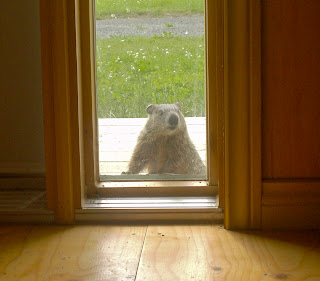 Countless moments where I realized that yes, there is pain and suffering- there is even a lot of those- but there’s also beauty. If there wasn’t pain and ugliness and suffering, what would we think of a view such as this? 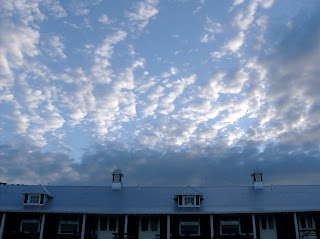 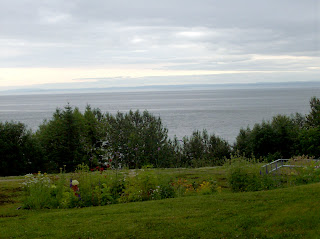 What would I think of the Menuet antique? 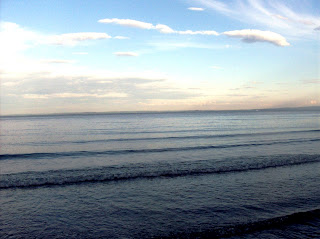 As hard as it is to suffer and to be sad, what would those “just right” moments be without hard times?

It reminds me of the verse, “give thanks in all circumstances; for this is the will of God in Christ Jesus for you.”(1 Thessalonians 5:18) I used to brush this off. I can’t do this! I mean, I could try, but how am I supposed to be thankful for suffering? Looking at the verse now, I don’t think it means “be thankful that you’re suffering and in pain,” but I think it means to be thankful that suffering and pain is not all there is. There is beauty in this life- a lot of it- and because of suffering I have found that my awareness of-and gratefulness for- beauty is heightened. 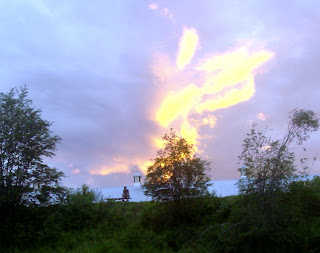 I am able to better recognize and appreciate moments that are “just right.”

Yvonne
I'm a graduate of Rice University majoring in viola performance, and I love what I do! I am so grateful for this opportunity to share music with others. All pictures on this blog are probably from the internet unless they are pictures of my friends and/or me.